Okay. Before this gets going, two warnings. First: this is likely to be a very long entry. I may even divide it up into two posts. So get comfy. Second: This will, most likely, be my only negative talk about an artist. This is a topic that makes me very angry. In fact, my anger over this topic is part of the reason this blog exists in the first place. There is a distinct possibility I will be much less formal and devolve into angry ranting. I shall do my best to avoid this, but you've been warned. This is something I'm very passionate about.

So. Roy Lichtenstein. His art is loved by artists, teachers, critics, historians, and students alike. Everyone knows "his" work, and those quotes are there for a reason as can likely be inferred from the title of this post alone. Every single art history class mentions him in some form, be it at a high school or college level. He is supposedly a great master of Pop Art, one of the first, even. His taking of comic panels and turning them into larger paintings is still seen as a great use of "low art" and turning it into "high art."

To that, I give you a simple response that can sum up my entire feelings on this without any pretense.

First, it must be made clear that my anger towards Lichtenstein is not because I'm some crazed lover of comics. Clearly, I love comics. Clearly, I believe comics should be treated as art and not some trash to be ignored. And guess what? Lichtenstein is the poster child for the problem. His copies of panels from master comic artists are insipid pieces that only have any life because of the original artists, not his work. Not to mention the fact that nearly all of his copies are inferior to the originals on basic levels, such as line quality, form, etc. And on top of THAT, his lettering is offensively bad all on its own. Oh, and on top of even that, there's the fact that he never credited the original artists, selling his copies for millions while the actual artists saw nothing of it and some spent their lives struggling to make it.

Now before I get into direct comparisons between his "art" and the original works, I want to shoot down the usual counters to these points I'm making. I've already hit on the fact that comics are not "low art" and that the artists behind the originals are worthy of far more praise than they ever have received from the art community, but just keep repeating that because its going in circles in my head.

The other major thing is the idea of Pop Art. One of the other major players in the Pop Art movement was Andy Warhol. Everyone knows his work to some degree. Soup cans, Marilyn Monroe, etc. He stole, too, and while I have a special hatred for some of his work for similar reasons, Lichtenstein was specifically stealing from OTHER artists at the time and essentially taking credit for their work, all the while letting the art world continue to belittle them. But on the idea of Pop Art, the twisting of popular culture into "art" and playing on ideas of mass production and similar themes, Lichtenstein's work STILL doesn't qualify as worthy of praise. Why? Because it is simple plagiarism, at best, and theft, at its worst. Many of the artist he copied were working at the time he was.

This is where the "but all artists steal" comment always comes in. And yes, in many ways, that's true. But that doesn't mean we should condone it, or dismiss the original artists as mere "drawers" as the Lichtenstein Foundation has. But you also have to remember that the only reason Lichtenstein is continued to be seen as such a great artist and thus, can get away with it even after his death, is because he has "historical significance." That's a pathetic way of saying that, yet again, he's better than the original artists despite the fact that doing what he did in any Art School worth its salt would have a student dismissed. You don't get to steal hundreds of pieces of art from other artists and call it your own, especially if you refuse to admit they existed or did anything of significance before you came along and did your thing. That's just called being an asshole.

So suck it up and accept the truth. Lichtenstein was a hack that couldn't paint well even when he copied, and now's the part where I start posting images to show that.

But yet again, one more thing crops up that I must mention. The images I'll be using are from an man named David Barsalou, who's been working for over three decades to find the original sources of many of Lichtenstein's paintings. He has an amazing Flickr page with tons and tons of these, with bits and pieces of info attached to the images and well worth looking through. I'm only going to highlight a few.

So right there is one of Lichtenstein's most famous pieces. He called it "WHAAM!" because of...well, obviously, the sound effect. The original is the top piece, and its from All-American Men at War #89, drawn by a man named Russ Heath. Looking at both side by side, sort of, it should be strikingly obvious which one is a copy and which one is an actual piece of art. Lichtenstein's copy of it is stunted, and badly rendered, despite the fact that he projected the images larger and TRACED them. There is no life to his copy, where as Heath's screams movement and force, emphasized as much be the missile as by a more strongly created and placed sound effect.

And make sure to look at Lichtenstein's attempt at lettering. Not only does he place the caption box in such a way that it looks like a damned flag on the tail of the plane, but his construction of the letters alone is simple sloppy and bad. 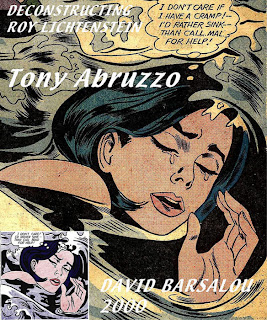 Here's another of Lichtenstein's famous pieces, he called it "Drowning Girl." This is, in fact, and obvious if you can read basic English on that image above, actually by an artist named Tony Abruzzo. It is likely from DC's first romance book that started in 1949, called Girls' Love Stories, a title that featured art by many of the great names in comic art.

So what makes Lichtenstien's version of it, the smaller one, art? Nothing. Nothing that wouldn't invalidate them both. All that he did to change it was his usual bad lettering, removing a line of the dialogue, and cropping it just a bit more. So why does Lichtenstein get credit for this and not Abruzzo? Hell, I'll admit, I didn't even know Abruzzo until I hunted information on him, and that is a DAMN shame. 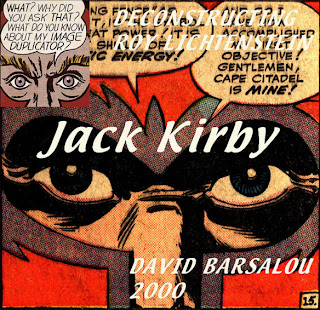 Yes, Lichtenstein even stole from Jack Kirby, the king of comics. No surprise really. Might as well steal from arguably the best, most prolific artists to ever work in comics, right? And hey, if you're going to steal from him, why not bastardize the image as much as possible.

And just in case you can't tell from the extreme close up, the original? That's the X-Men villain, Magneto. And I once again just have to point out how horrible that lettering is. My god. Just take the words out if you can't do it. 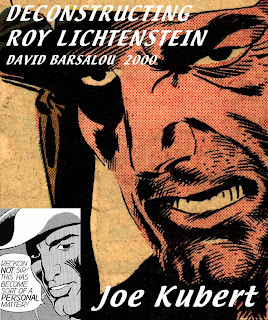 And here's a piece called "Reckon Not, Sir!". If you can't tell, Lichtenstein was a master of titling his work. And if you also can't tell, I'm heavily falling into sarcasm the more I do this. Apologies, but its the only way I can cope with it.

This one here isn't nearly as much a direct copy as others, but it still very clearly is a copy. And, again, a horrible attempt. The cowboy hat put on Lichtenstein's character? There's no way that's actually on his head. Hats don't work like that. That's least two different angles, possibly three. THIS is why I get angry. This kind of thing creates that pervasive talk that comic art is, and always has been, bad. That is CLEARLY not the case.

Joe Kubert, the artist of the original piece from DC Comic's Sgt. Rock, is one of the classic artists that has defined what American comics have looked like. That panel alone is gritty, hard, and filled with intense emotion. It is an amazing piece of art, and guess what? Its tiny. Because its a comic book panel. That takes an intense skill that few have.

And to go a little further, Joe Kubert is no slouch either. The man founded The Kubert School, a technically school entirely focused on teach sequential art and the craft of comics. There is a huge list of alumni from the school that have gone on to work in comics and become famous in their own right, including his two sons, both of whom work in comics today. 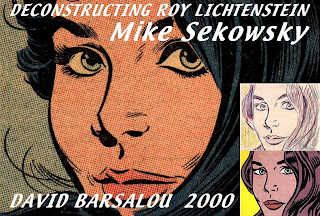 This is the last image I'm going to attack for this post, and there's a specific reason for it. Lichtenstein called this "Seductive Girl", and as you can see from both of his versions, the title is in every way a lie. The life and emotion in this image only came from Mike Sekowsky, as all of that is gone in Lichtenstein's.

And yet, how many that read this know Mike Sekowsky? He worked on so many comics its almost crazy. From superheros like the Justice League of America and Wonder Woman to romance comics, westerns, and war comics. But we see the image there in the bottom right hand corner, those bright, garish colors and the flatness of it all, and we think that's him. We think that because Lichtenstein has helped to paint the image of American comics as low quality art, but the larger image, Sekwosky's actual art, is never seen.

Yes, I'm not the first to rant and rave on this. No, I won't be the last. And I shouldn't be. There is no justification for putting Lichtenstein in a museum when these artist and tons of others have been treated like trash by the art community, first, and then the public at large, second. We give credit to a hack like Lichtenstein and happily claim how good he is compared to those bad old comics, but most people never look at those originals.

Every single art student should. Especially American art students. Why? Its our history. American comics are a truly American style, and there are great, amazing artists that helped to define it and are still changing it today. That's why this blog exists, because I want other artists to know about them. I want teachers to see them and show their students. And I want hacks like Lichtenstein treated like they deserve to be: Liars and thieves.

Next update...I'll go back to talking about artists I love that we should all love. But this needed to get out.
Posted by Graham at 8:47 PM

I'm Graham Johnson, the writer and co-creator of the comic Of Stars and Swords, along with other short comics. I also like to ramble about art and style and various other things.